The Healthcare industry in India is quite expensive and expansive, the main barrier behind its expensiveness is that our country imports almost 80 percent of required medical equipment. In the past few years, the demand and importance of Made In India products have risen in our local markets as people understand that there isn’t much quality difference and the price is relatively low.

Such is our implants revolutionist Mr. Tushar Pandya, who founded Yogeshwar Implants way back in 1986. Tushar has a degree in Pharmacy along with an MBA in International Business. The reason why we said revolutionist is in current India, if ten surgical implants are used, nine of them are from Yogeshwar. Being the son of a doctor, he always wanted something in the healthcare industry, and he believes that destiny led him into the orthopedic implant business.

It all started when an eminent orthopedic doctor and a good friend of Tushar from Mumbai, suggested to him that he should produce some specific types of nail implants. And in 1992, Yogeshwar Implants was the first Indian company to manufacture ‘Interlocking Nails’ in India. The implants were primarily imported by some MNCs but weren’t quite affordable. So the need for a substitute was quite high, seeing Tushar tried and was successful in creating an Indian substitute. Now what made it unique and preferable apart from the price range was that it was less time-consuming. As earlier the implant surgery was quite time-consuming, blood loss was high and the recovery time of the patient was long too. But with this interlocking nail implant, just with a small incision, the process can be done, and it also minimizes the time and loss of every process. This is how Yogeshwar Implants became a game-changer for the orthopedic industry in India.

When Tushar began operations in 1986, it wasn’t easy to compete with large MNCs. One of the biggest problems he faced was raw material, as the medical grade of stainless steel wasn’t available in India. Due to this Yogeshwar Implants had to import raw materials, thus seeing the demand the Indian traders started producing it locally. Along with materials, the second difficulty was the technology, as the competitors were MNCs from advanced nations like the UK, USA, and Germany. It was quite difficult as back then India wasn’t technologically advanced. Somehow they managed by modifying some machinery in the country and thus Made In India interlocking nail was possible.

In business people usually earn first and then donate. But Tushar says that he’s in a business where he can earn and help people at the same time. This is the reason that motivated him to do the business. As orthopedic implants are used to unite fragments of bone, they help you get your life back on track. Tushar often organizes awareness program about their products and create social awareness on YouTube to instigate the message about how their products can be easily used and they often minimize the infections. Their other CSR activities include education of their staff’s child and medical camps.

What keeps Tushar going is that at creating one more product which can help people live their life without a brief pause. At any point in time, he always thinks about innovating good quality products which can help the people who can't afford the imported products.

Every product at Yogeshwar Implants is completely Made In India, which is a step towards a self-sufficient India. Tushar says that government can help them by announcing some more PLI (Production Lined Incentives) schemes for the implants industry. A scheme for Medical Devices manufacturing proposes a financial incentive to boost domestic manufacturing and attract large investment in medical devices segments. More than 70 percent of medical devices are imported in India, so this PLI scheme would boost the Made In India process. He further adds that Yogeshwar Implants falls in MSME, that is micro small industries, that particular segment needs a boost currently. His company receives a subsidy on CNC machines (Computerized numerical control) on purchase. Other than that there is no subsidy but he does mention that GST has relieved the company from all other difficult taxes. Taxation in the NDA government is quite easy says, Tushar Pandya.

All products Yogeshwar Implants has are better and local substitutes for the imported implant. They provide Dollar quality in Indian rupees. Along with the rich experience of 35 years, the products cost less as they are made in India so there’s no import duty which is almost over 12 percent. They have an up-to the standard manufacturing unit in Mumbai, which facilitates accessibility all over India. Tushar says that innovation of new products keeps us in the market. It is a long journey of making around 35 40 products in every range.

This pandemic has been pretty hard on all of us, but it can be only fought with united efforts says Tushar. Yogeshwar implants kept on sending salaries to the staff despite the unit was closed for the phases. Whenever the unit was opened during this phase, they tried to keep up with the health safety of the staff. Due to the diligence of the company, there wasn’t a single COVID case. Yogeshwar Implants looks forward to getting export registration in more than 15 countries in the next two years. They are already recognized at the national level and look forward to spreading their wings. Besides this, they wanna keep innovating and reduce the cost of surgical implants.

Tushar believes that the Indian govt needs to pump in more funds, which can help us to make the country a hub for implants and we can export the products for foreign revenue which will help the Indian economy. There are hardly 10 countries in the world that are leading in implants, India can lead the world in this industry.

Entrepreneurs bring change to our society with innovations and often bear high risks. It's upon us how to support local Indian business and show the world what India has got! 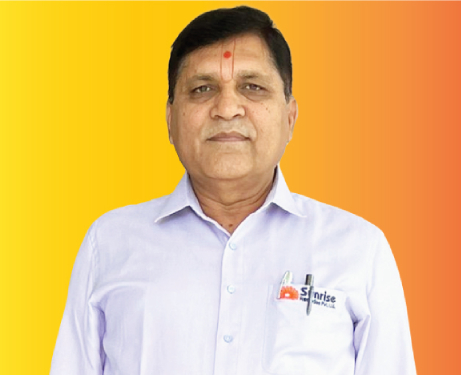